I was recently thinking about my decision to use Vultr for hosting a new project of mine. It was definitely one of the cheaper options, but not the cheapest. Why did I pick it? Understanding their strategy took my on a rabbit chase that just reinforced something I already knew: put the customer first. Looking at their pricing table started the journey:

They gave me clarity into how much I was spending. $5/month sounds better to me than $60/year or $0.007/hour. But why? Part of it is because I don’t think in years or hours. I think in months for subscriptions. But the other part is that I need numbers that hurt but not too much. Being told Im going to pay a fraction of a cent feels like they are hiding the truth and probably high price. Similarly, being presented with $60 just sounds like a lot. I don’t want to lose $60. But $5 is how much I pay if I’m feeling good at Starbucks. I can do that.

I suspect this happens because of Weber-Fechner law. This states we perceive things logarithmically. Going from $5 to $10 hurts, but $50 to $55 doesn’t. Similarly with time if you were going to wait one day for something to arrive from Amazon, waiting one more day is hard. But 8 days instead of 7 is easy. So if we overlay logarithmic curves one for price and one for time, we can figure out the best ratio to use without ever changing the price. You can imagine it like the following with price over time because we are sensitive relative to time. 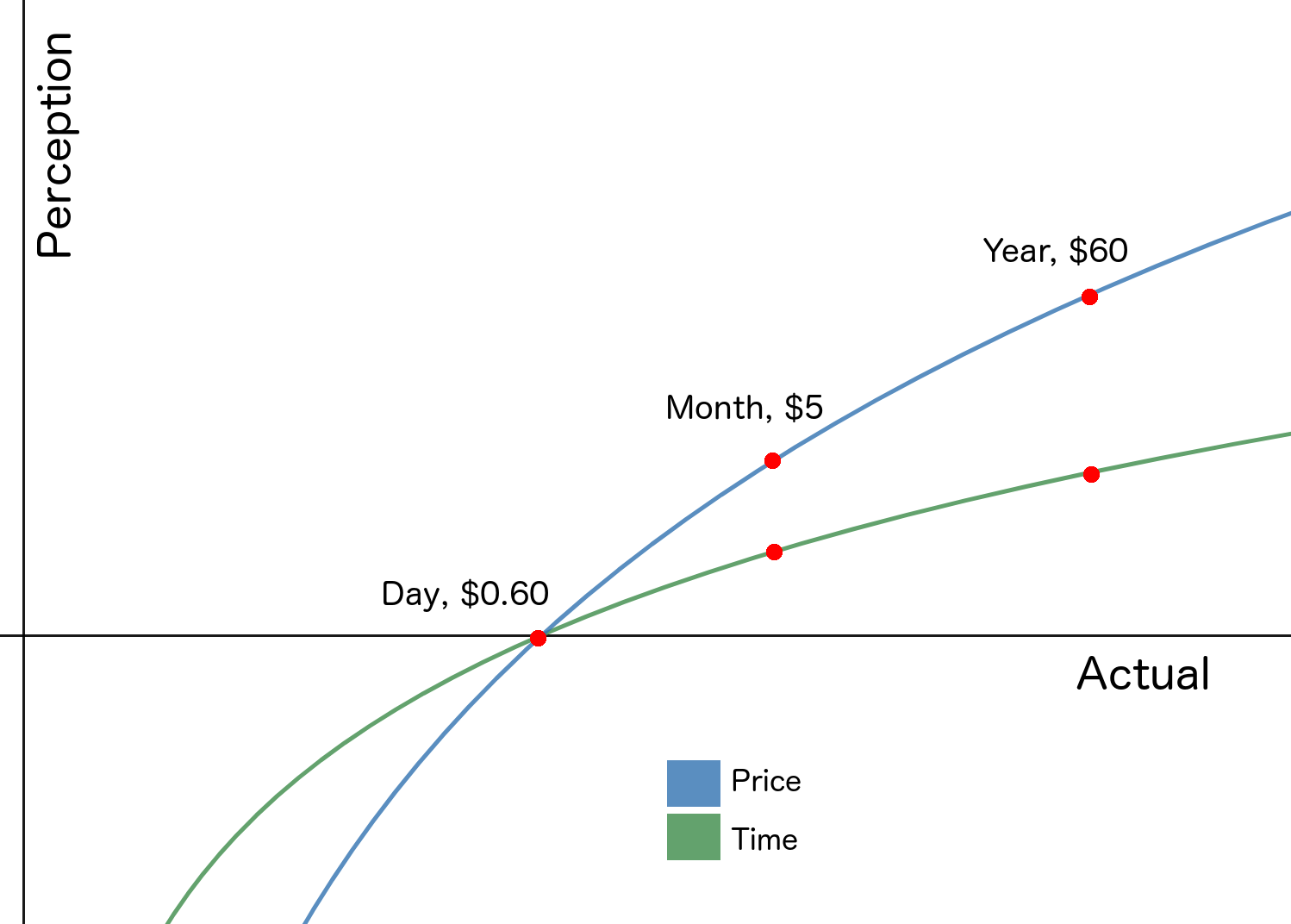 And really all this suggests is that we should put pricing in terms of the customer’s frame of reference, because increasing the time frame will only hurt. What I mean by this is the ratio of the two curves only gets worse as you go along, their value perception diminshes. Furthermore, decreasing it past the frame of reference probably just wont make sense (fractions of cents per hour.) Ultimately, you should target your pricing at your customer. Corporate clients likely want yearly because that is what is reported to senior people and shareholders. Individuals probably want either daily/weekly/monthly because that is how they budget their lives. Highly technical, tightly budget individuals maybe want the per hour pricing.

TLDR: Know your customer and how to make your pricing a no-brainer. They should never have to do math to know, This is great!”